the Bureau of Labor Statistics (BLS) released its Producer Price Index report for March 2022. It said prices for building materials rose 1.5% in the month, seasonally adjusted. The index was 23.2% higher than its level a year earlier.

Overall prices for processed goods for intermediate demand rose 2.1% during the month. This index was 21.7% higher than its level a year ago.

For reference, the changes in these indexes can be compared to an 8.5% increase in the overall index. consumer price index (CPI-U) for the 12 months ending March. CPI-U rose 1.2% for the month. The housing portion of the CPI rose 5.0% from its level a year ago.

Yield Pro has compiled the price changes reported by the BLS for our standard list of building products. These are raw materials whose prices directly impact the construction cost of an apartment building. The first two columns from the right of the table show the percentage change in product price from the previous year (12 MB PC Change) and the percentage change in price from February 2022 (1 MB PC Change). If no price data is available for a given product, the change is indicated as N/A.

The pre-COVID column lists the change in current commodity prices compared to average prices from December 2019 to February 2020, before the pandemic affected the economy. This may give a more accurate idea of ​​the magnitude of recent price increases for raw materials, such as lumber, whose prices have already risen sharply in the past year, than does the 12MB PC Change column.

Previously, individual commodity price indexes published by the BLS were almost never revised after release. However, in recent months, revisions have been made to many component price indices, some of them important. These revisions will be discussed below.

The first chart below shows the history of the Wood Products Price Index over the past 37 months. Note that the prices used by the BLS to compile the indices are taken on the Tuesday of the week containing the 13and day of the month. In March 2022, that would have been March 15. 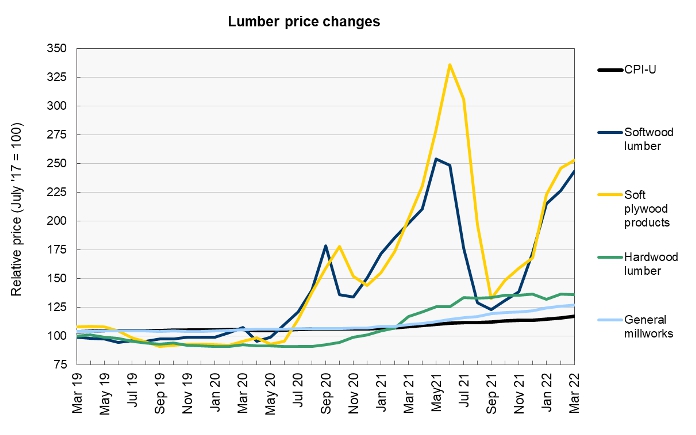 In March, the price of softwood lumber edged out plywood to post the largest monthly percentage increase of the products we track, up 7.6%. However, its annual price rise figure is beginning to benefit from a comparison to a period last year when prices rose sharply. The wood was up only 23.1% year-over-year in March.

Prices for general millwork and hardwood lumber continue to rise steadily, in line with the overall rise in building material prices.

The following chart below shows the recent history of several other building materials prices. These are the prices of relatively simple basic products whose prices are strongly influenced by those of the materials of which they are composed. 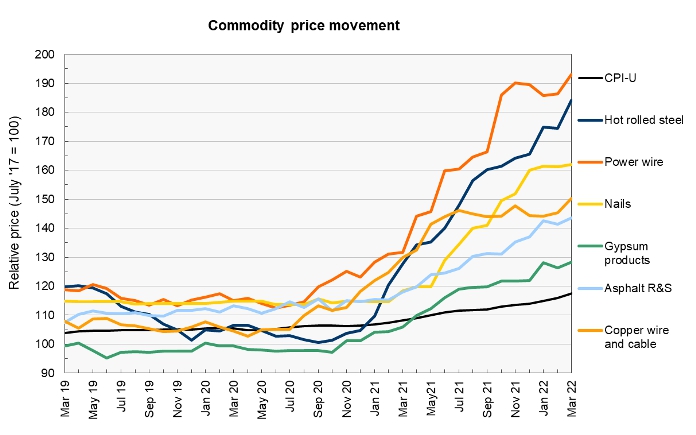 Hot-rolled steel bar prices followed only wood products for the largest monthly increase in this report. Prices for sheet metal products also rose, but the monthly rise in nail prices was relatively subdued, at least compared to the prices of other building materials we track.

MarketWatch Reports that the American NYSE steel index resumed its upward movement at the end of March before reaching a plateau in April. It closed April 13 at $2,044, up $262 from its level a month ago. However, steel futures have declined over the past month. The July 2022 contract closed on April 13 at $1,340, down $319 since we last reported on it. The September 2022 contract is at $1,335.

The monthly rates of increase in the price indexes for asphalt roofing and siding and gypsum declined slightly in March. They were roughly in line with the general rise in building material prices.

The price variations of several of the most finished products in our sample are illustrated in the final table below. Price increases for these building materials have been relatively subdued this month. The only one that recorded a higher rate of increase than general price inflation was that of enameled iron and metal sanitary ware, which recorded an increase of 1.8%. However, the February price index for this product was adjusted down 4.7%, the largest downward revision of any product we track. Compared to the preliminary price index released last month, the price of enameled iron and metal sanitary ware fell 2.9% for the month of March. 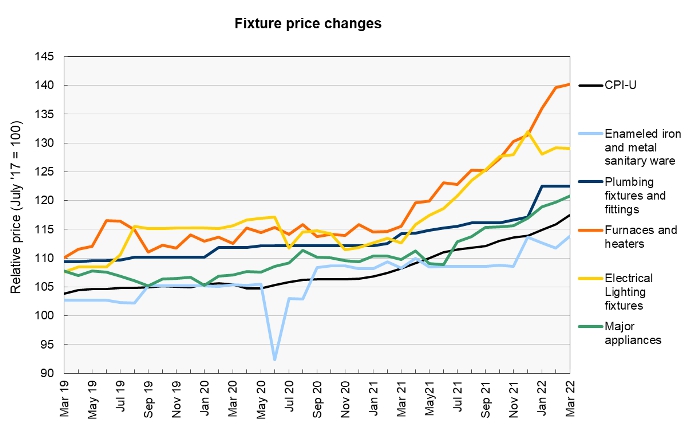 the Bureau of Labor Statistics (BLS) released its Producer Price Index report for November 2021. It showed prices for building components and materials rose 1.6% in the month, adjusted for seasonality. The index was 21.0% above its level a year earlier. Aggregate prices of products processed for intermediate demand rose 1.5% during the month. The […]

New Jersey, United States,- The Global Green building materials market research offers in-depth analysis of the market throughout the projection period. The study includes a number of sections as well as a review of opportunities and elements that are most likely to have a major impact in the future. This study offers a comprehensive analysis […]

In a broad and colorful chat with five steel industry analysts, Cleveland-Cliffs CEO Laurenco Goncalves said the company’s use of scrap has increased and that later this decade it may look to increase the capacity of its electric arc furnace (EAF) rather than paying for a blast furnace reline. In his opening remarks, Laurenco Goncalves […]